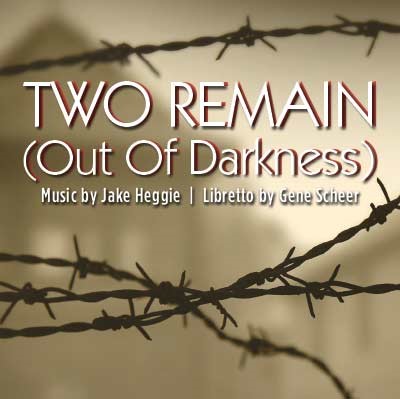 After presenting two successful and innovative video productions in 2020-21, University Opera is back on stage with the Wisconsin premiere of Jake Heggie and Gene Scheer’s moving chamber opera, Two Remain (Out of Darkness). This memory piece, full of exquisite and evocative music, tells the stories of Holocaust survivors Krystyna Zywulska and Gad Beck. Many years after the war, both are haunted by the memories of those they lost and what they had to sacrifice in order to survive. The work is based on Zywulska’s and Beck’s memoirs as well as material from the U.S. Holocaust Memorial Museum and the documentary film Paragraph 175. Three performances will be presented at Music Hall on the UW-Madison campus: November 19 at 7:30pm, November 21 at 2:00pm, and November 23 at 7:30pm. The Mead Witter School of Music’s Director of Orchestral Activities, Oriol Sans, will conduct a chamber ensemble comprised of members of the UW-Madison Symphony and Karen K. Bishop Director of Opera, David Ronis, will direct the production.

Krystyna Zywulska was born Sonia Landau, a Jew, in 1914. In 1942, she escaped from the Warsaw Ghetto, took on a Christian identity and started working with the Polish Resistance. She was later arrested by the Nazis and sent to Auschwitz as a political prisoner. Secretly composing lyrics to inspire her fellow prisoners, her job in the Camp was to catalogue the personal effects of thousands of women and children before they were murdered in the gas chambers. Many years after the war, she is asked by a journalist to record her stories. Plagued by the ghosts of her past, she struggles to find the words.

Gad Beck’s first true love, Manfred Lewin, was sent to Auschwitz when he was 19 years old and murdered. As an old man, Beck is visited by the image of Manfred as the painful truth of their story emerges. It is estimated that over 100,000 men and women were imprisoned by the Nazis for homosexuality during World War II and many of them were murdered. Even after the war was over, Paragraph 175, the German law prohibiting homosexuality, remained in effect until 1969.

These are only two of thousands and thousands of survivor stories, but they have much to teach us. In thinking about the Holocaust, we tend to focus on the millions who were lost. But Two Remain (Out of Darkness) presents the stories of two survivors as they painfully struggle with “survivor’s guilt.” Years later, they are still haunted by the unspeakable atrocities of the war, the profound losses they suffered, and by the choices they made in order to live. In the finale, the characters from both stories unite to proclaim their survivorship and, perhaps, to find some kind of closure.

After each performance, there will be a talkback with the cast and creative staff.

Tickets are $27 for the general public, $22 for senior citizens and $10 for UW-Madison students, available in advance through the Campus Arts Ticketing office at (608) 265-ARTS and online at http://artsticketing.wisc.edu/. Tickets may also be purchased in person at the Wisconsin Union Theater Box Office or at the door beginning one hour before the performance. The Carol Rennebohm Auditorium is located in Music Hall, at the foot of Bascom Hill on Park Street.

October 19, 2021/by Eric Murtaugh
0 0 Eric Murtaugh Eric Murtaugh2021-10-19 22:39:362021-10-19 22:39:36Two Holocaust survivors tell their gripping stories in Two Remain (Out of Darkness)
Dawn Dongeun Wohn’s interview on Tony Barnfield’s Sunday Supplement... A Musical Homecoming: Nathaniel Stampley returns to Madison
Scroll to top
We use cookies on this site. By continuing to browse without changing your browser settings to block or delete cookies, you agree to the UW–Madison Privacy Notice. GOT IT!
Privacy & Cookies Policy