You are here: Home / News / Awards 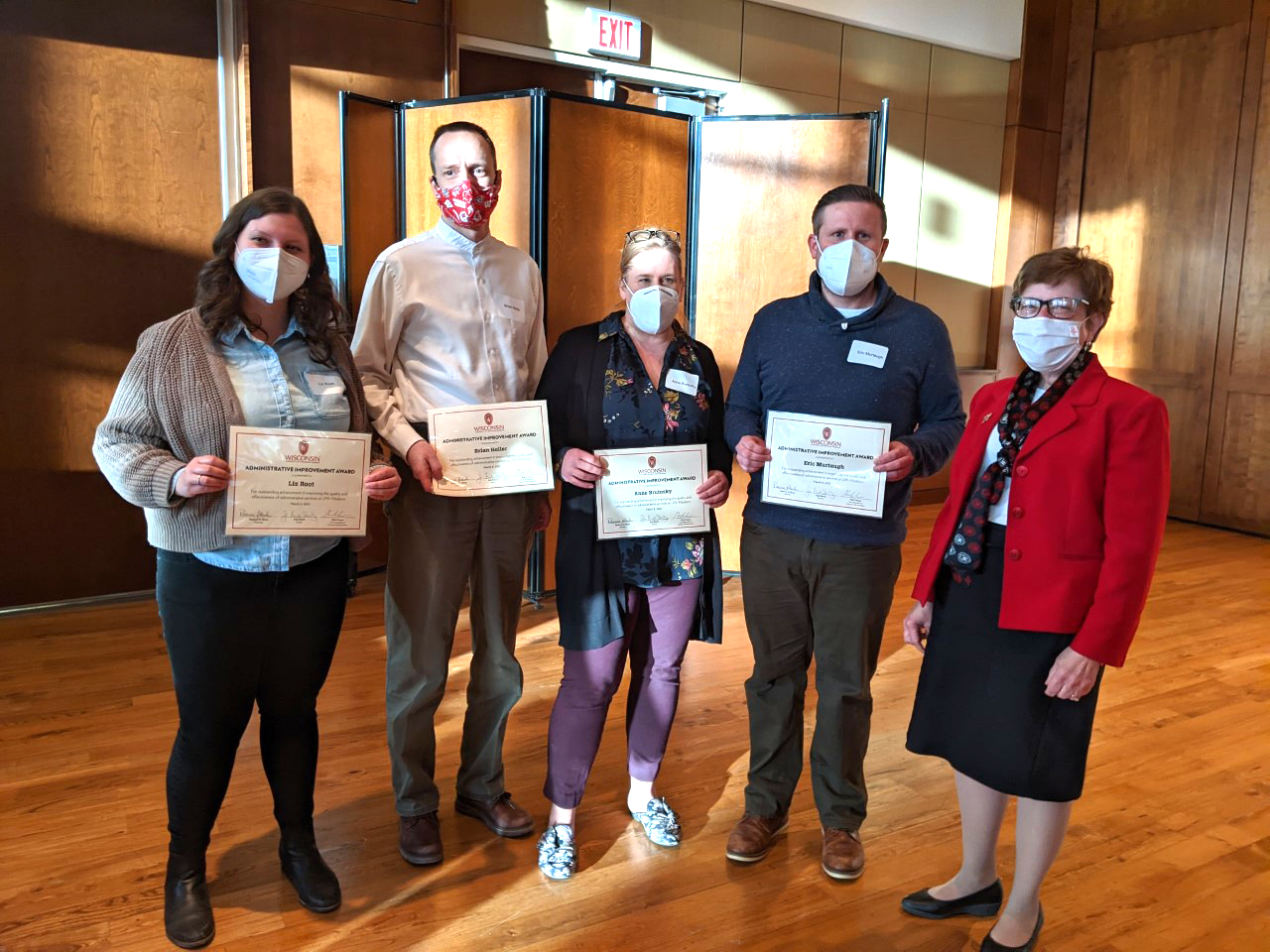 The UW–Madison Administrative Improvement Awards celebrated their 10th year of recognizing process redesign, process development and customer service innovations that resulted in improved efficiency, revenue, cost savings or service delivery. More than 20 individuals and teams were nominated this year, and five projects were selected to receive the award, including the School of Music production team.

“The number of nominations says a lot about the commitment of thousands of employees across campus to finding better, more efficient and effective ways to do their work,” Chancellor Rebecca Blank said at a recognition ceremony for nominees and recipients on March 8.

“I love the team aspect of this award,” Blank said. “We have five winning projects and 35 people involved, and that type of collaboration is exactly how you get things done.”

Rob Cramer, interim vice chancellor for finance and administration and executive sponsor for the awards, noted that administrative work supports the core missions of UW–Madison. “The Administrative Improvement Awards shine a light on the really impactful work that goes on behind the scenes to improve service and move UW–Madison forward,” Cramer said.

The 2022 Administrative Improvement Award recipients are:

During the pandemic, this team from the School of Music had to quickly figure out how to provide access to musical performances and recitals when audiences were told to stay home. Up to that point, the School of Music had no streaming experience, even though the new Hamel Music Center was equipped to support it. The production team streamed the first public live stream in September 2020.  By the end of Spring 2021, the production team streamed more than 130 performances with 56,700 views worldwide.

In developing the live stream capabilities, the production team also created a workflow and database to streamline its processes and improve real-time communication and coordination. The team has since expanded the use of the shared database beyond live streaming to traditional performances at the Hamel Music Center. This fall, the team connected the database and workflows to ticketing and creating concert programs. Team members continue to respond to the changing needs of music performance, sharing the gift of music with supporters around the world.

Stepp implemented an automated process to increase and track the number of faculty volunteers in critical medical student education activities. Since the project was implemented, 9 out of 11 divisions fully met required medical student education hours. In the 2021–22 school year, the percentage of faculty volunteers increased from 42% to 87%. This has not only been a win for Stepp and her team, but for the faculty involved — and, of course, the students who reap the benefits of these activities.

In his first year as the fellowship officer for campus, Haack noticed a gap in resources and services for students to pursue external fellowships. He created a database of external fellowships, delivered a series of preparation workshops and seminars for external fellowship applicants, and personally provided almost 50 individual consultations with applicants. Nathaniel collaborated with a handful of stakeholders on campus to launch the database in late January 2021. The number of students who received external fellowships will be reported later this year. In the meantime, Haack and his team have received overwhelmingly positive feedback from students.

The Office of Student Financial Aid team improved student access to the Emergency Request Application during the pandemic. They implemented an eForm application that streamlined the back-end processing for financial aid requests, cutting the processing time for HEERF requests in half between the first and second rounds of funding. By the end of December 2021, more than 9,000 students had received HEERF II funding. The current HEERF III form will be repurposed to an emergency request application where institutional aid will be provided to students experiencing financial crises unrelated to the pandemic.

Academic standing reflects a student’s progress towards their degree and can indicate if a student is experiencing academic difficulties and needs additional support. Academic governance approved changes to the undergraduate academic standing process a few years ago. In response, the Registrar’s Office prioritized and funded a project to completely update the Student Information System academic standing processes. The team collaborated with more than 20 partners from schools, colleges and divisions at UW–Madison. Team members successfully applied the “Good Standing” label to almost 398,000 students dating back to 1979, providing better service to students when their transcripts are reviewed by graduate school admission committees and potential employers. The modernized process resulted in improved efficiency and cost and time savings, freeing up more time to serve students.

UW-Madison’s University Opera is on a roll. Both shows from last year, Transformations and Mozart’s Le nozze di Figaro, have won awards in the National Opera Association’s (NOA) Opera Production Competition for 2015-2016. It is the second year in a row that UW-Madison has garnered an award from NOA, and the first time that each production was separately recognized. University Opera produces only two operas each year. Both productions were directed by David Ronis, inaugural Karen K. Bishop Director of Opera, who is now a six-time winner of the competition. His previous awards occurred while he worked at Queens College in New York.

The two winning UW-Madison productions carried casts and crew of different sizes and strengths and were produced at different budgetary levels, hence their separation into distinct categories.

Ronis accepted the awards at the NOA convention in Santa Barbara last weekend. “Needless to say, I’m very proud,” he said. “While last year’s award put University Opera on the national map in a very public way, these two wins firmly establish us among the premier collegiate opera producing organizations in the country,”

The competition is blind, meaning that performing companies are not identified to judges. Those eligible include small professional opera companies and opera training programs from academic institutions, music conservatories, summer opera training programs, and opera outreach programs. Entries are separated into seven divisions by the judges; the criteria include the size and scope of institution’s music and opera program and the level of vocal training of the singers in the cast.

Though judging is always subjective, Ronis says he isn’t surprised that both shows won awards. “I was very proud of Figaro – the production was elegant, the storytelling clear, and it was well-sung, well-played, and well-conducted,” he says. “Transformations was definitely more of a challenge artistically, but very rewarding to produce.  The students involved became quite personally engaged with telling Anne Sexton’s fairy tale settings, and the result was a wonderfully creative, funny, yet moving production which packed a deep emotional punch.”

Although both winning productions received praise in the local press, Transformations, a dark yet humorous opera based on Grimm’s fairy tales as re-imagined by Pulitzer Prize-winning poet Anne Sexton, was singled out as being particularly imaginative.

“Ronis’s direction (he also serves as visiting director of the opera program) is richly inventive, with snippets of choreography throughout, including a conga line and a parody of the Supremes. The staging is delightful, using the full height of the set to frame and reframe action. This entire production would easily compare well to any professional opera company,” wrote author Jay Rath in Isthmus.

University Opera’s next production will be The Turn of the Screw, Benjamin Britten’s operatic setting of Henry James’s novella.  Premiered in 1954, the composer’s final chamber opera tells of a young governess who is hired to care for two children in an isolated country house in mid-19th century England. She soon realizes that the children are haunted by secrets and spirits that harm them in very real ways. University Opera’s telling of Britten’s gothic horror opera chillingly challenges audiences to consider the very existence of ghosts.

The production will be directed by Ronis and conducted by Kyle Knox, with musical preparation by Daniel Fung, assistant adjunct professor of vocal coaching.  Members of the cast will include Erin Bryan and Katie Anderson, who will split the role of the Governess, Alec Brown (Prologue and Quint), Cayla Rosché (Mrs. Grose), and Anna Polum (Miss Jessel).  The roles of the children in the opera will be played by Elisheva Pront and Emily Vandenberg (Flora) and Simon Johnson and Amitabha Shatdal (Miles).  Set design will be by Frank Schneeberger; lighting by John Frautschy, and costumes by Sydney Krieger and Hyewon Park.  Additional staff include Greg Silver, technical director; Meg Huskin, assistant director, and Meghan Stecker, stage manager.