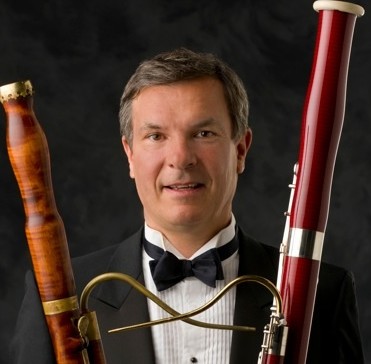 In addition to his teaching responsibilities as Professor of Music, Bassoon, Marc Vallon is bassoonist for the Wingra Wind Quintet in residence at the School of Music. A native of France, Vallon studied at the Paris National Conservatory where he earned two Premier Prix, one for bassoon studies with Maurice Allard and the other for chamber music with Maurice Bourgue, Myron Bloom, and Christian Lardé. He started playing professionally at the age of 18 during his conservatory studies and joined the Paris-based Orchestre National de France and the Orchestre Philharmonique de Radio-France, performing under many renowned conductors including Sergiu Celibidache, Leonard Bernstein, Seiji Ozawa, Karl Boehm, and Lorin Maazel. Soon afterward Vallon’s interests led him to the numerous smaller Parisian groups specializing in contemporary music. He was a founding member of the Nielsen Quintet in 1975, with which he played hundreds of concerts devoted largely to 20th century repertoire. He also collaborated with the Ensemble Intercontemporain, conducted by Pierre Boulez, and took part in the first performance of Boulez’s major work, Répons. Concurrently, he earned a degree in philosophy at the Paris-Sorbonne (University of Paris).

Marc Vallon was one of the pioneers of the early music movement in the 1980s. He was principal bassoonist with the Amsterdam Baroque Orchestra for more than 20 years and performed with other leading early music ensembles such as La Chapelle Royale, Les Arts Florissants, the Orchestra of the Age of Enlightenment, and Tafelmusik. His personal collection of early instruments includes originals and copies of instruments dating from 1670 to 1920.

Vallon has taught modern and baroque bassoon at the Paris Conservatory and the Lyon Conservatory and has given master classes worldwide. His name can be found on more than one hundred commercial recordings, among them his acclaimed rendering of the Mozart bassoon concerto with the Amsterdam Baroque Orchestra.

An avid composer and arranger, Vallon uses these skills in his pedagogical approach. Besides his bassoon and chamber music teaching responsibilities, he teaches classes in “Solfège, Conservatoire style” and bassoon pedagogy.