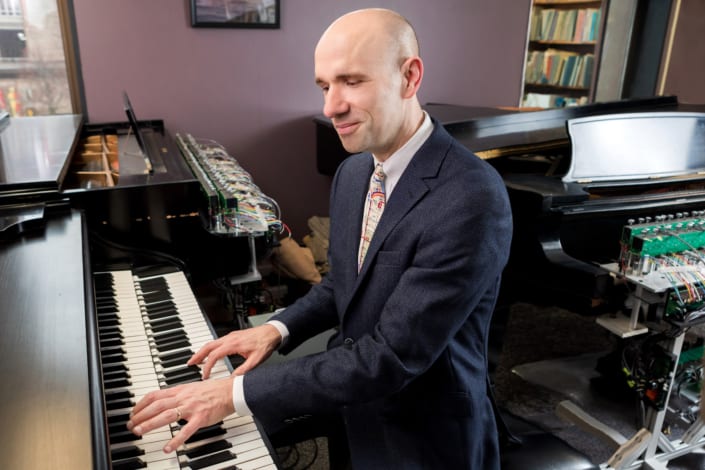 The Kennedy Center made a video of Taylor explaining and performing on UW-Madison’s double-keyboard piano.

Hailed by critics as “frighteningly talented” (The New York Times) and “a great pianist” (The Los Angeles Times), Christopher Taylor has distinguished himself throughout his career as an innovative musician with a diverse array of talents and interests.  He is known for a passionate advocacy of music written in the past 100 years — Messiaen, Ligeti, and Bolcom figure prominently in his performances — but his repertoire spans four centuries and includes the complete Beethoven sonatas, the Liszt Transcendental Etudes, Bach’s Goldberg Variations, and a multitude of other familiar masterworks. Whatever the genre or era of the composition, Mr. Taylor brings to it an active imagination and intellect coupled with heartfelt intensity and grace.

Mr. Taylor has concertized around the globe, with international tours taking him to Russia, Western Europe, East Asia, and the Carribean. At home in the U.S. he has appeared with such orchestras as the New York Philharmonic, Los Angeles Philharmonic,  Detroit Symphony, and the Milwaukee Symphony.  As a soloist he has performed in New York’s Carnegie and Alice Tully Halls, in Washington’s Kennedy Center for the Performing Arts, the Ravinia and Aspen festivals, and dozens of other venues. In chamber settings, he has collaborated with many eminent musicians, including Robert McDuffie and the Borromeo, Shanghai, Pro Arte, and Ying Quartets. His recordings have featured works by Liszt, Messiaen, and present-day Americans William Bolcom and Derek Bermel. Throughout his career Mr. Taylor has become known for undertaking memorable and unusual projects.  Examples include: an upcoming tour in which he will perform, from memory, the complete transcriptions of Beethoven symphonies by Liszt;  performances and lectures on the complete etudes of György Ligeti; and a series of performances of the Goldberg Variations on the unique double-manual Steinway piano in the collection of the University of Wisconsin.  He has actively promoted the rediscovery and refurbishment of the latter instrument; in recent years he has also been building a reinvented and modernized version of it, a project that relies on his computer and engineering skills and was unveiled in a demonstration recital in 2016.

Numerous awards have confirmed Mr. Taylor’s high standing in the musical world. He was named an American Pianists’ Association Fellow for 2000, before which he received an Avery Fisher Career Grant in 1996 and the Bronze Medal in the 1993 Van Cliburn International Piano Competition. In 1990 he took first prize in the William Kapell International Piano Competition, and also became one of the first recipients of the Irving Gilmore Young Artists’ Award.

Mr. Taylor owes much of his success to several outstanding teachers, including Russell Sherman, Maria Curcio-Diamand, Francisco Aybar, and Julie Bees. In addition to his busy concert schedule, he currently serves as Paul Collins Associate Professor of Piano Performance at the University of Wisconsin in Madison. He pursues a variety of other interests, including: mathematics (he received a summa cum laude degree from Harvard University in this field in 1992); philosophy (an article he coauthored with the leading scholar Daniel Dennett appears in the Oxford Free Will Handbook); computing; linguistics; and biking, which is his primary means of commuting. Mr. Taylor lives in Middleton, Wisconsin, with his wife and two daughters. Christopher Taylor is a Steinway artist.