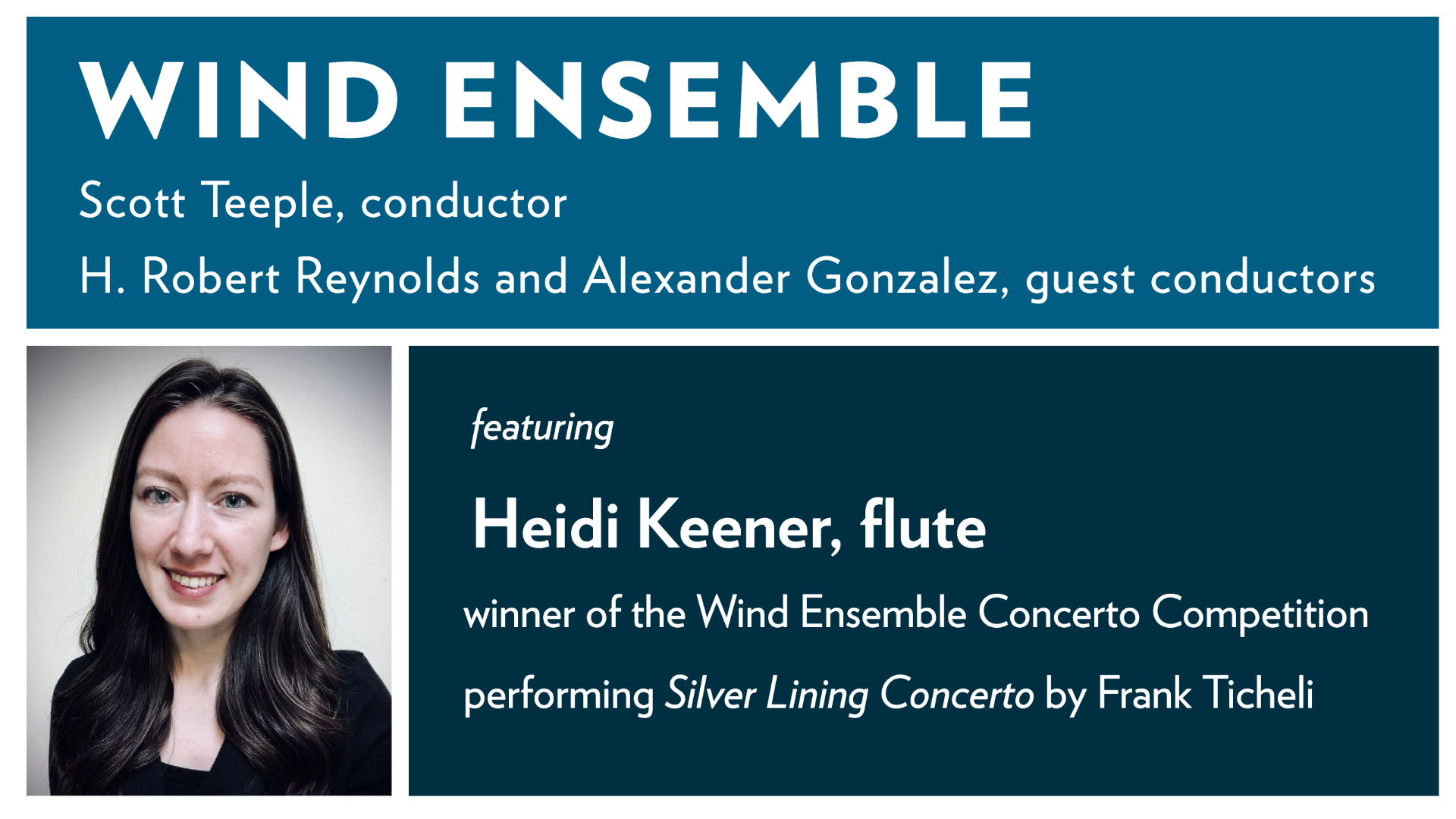 In addition to private teaching, Heidi is active as an instructor for the UW-Madison Community Music Lesson Program and works with the Madison Flute Club’s Adult Flute Choir and Chamber Ensemble. She has presented workshops and adjudicated events at Youngstown State University, Western Michigan University, the University of Wisconsin-Whitewater, and the Wisconsin Flute Festival. In the fall semester of 2018, she had the opportunity to teach members of the Western Michigan University flute studio during Martha Councell-Vargas’ sabbatical leave. Heidi recently won the piccolo position with the Fargo-Moorhead Symphony and has performed with regional orchestras and ensembles in South Dakota, Wisconsin, Michigan, Ohio and Pennsylvania. She was a quarterfinalist in the 2020 NFA Young Artist Competition and has placed in the COFA Young Artist, SEMFA Ervin Monroe, NFA Piccolo Orchestral Audition, and WMU Concerto Competitions.

H. Robert Reynolds was Director of University Bands, Chairman of the Conducting Department, Director of the Instrumental Studies, and Arthur Thurnau Professor of Music at the University of Michigan until 2001. Following his Michigan tenure, he became the Principal Wind Ensemble Conductor and the H. Robert Reynolds Professor of Wind Conducting at the University of Southern California for nearly 20 years. In addition to these responsibilities, he was, for nearly 40 years, the conductor of the Detroit Chamber Winds and Strings, which is made up primarily of members from the Detroit Symphony.

Maggio Musicale (Florence, Italy), the Tonhalle and the Lucerne Festival Hall in Zurich and Lucerne, Switzerland, and at the Holland Festival in the Concertgebouw (Amsterdam, The Netherlands), as well as the 750th Anniversary of the City of Berlin. He has also conducted at the Sydney Opera House in Australia.

Professor Reynolds is Past President of the College Band Directors’ Association, and he is the very first recipient of the Lifetime Achievement Award from that organization. He is also Past President of the Big Ten Band Directors’ Association. He has received the highest national awards from Phi Mu Alpha, Kappa Kappa Psi, Phi Beta Mu, the National Band Association, the American School Band Directors’ Association, and was awarded the “Medal of Honor” by the International Mid-West Band and Orchestra Clinic. He is the recipient of a “Special Tribute” from the State of Michigan and was a member of the National Awards Panel for the American Society of Composers, Authors and Publishers (ASCAP) for over 10 years and in 2001 received a national award from that organization for his contributions to contemporary American music. He is also listed in the New Groves Dictionary of American Music, and his frequent conducting appearances have included the Eastman School of Music, New England Conservatory, Oberlin Conservatory, Northwestern University, Manhattan School of Music, as well as the Wind Ensemble at the Tanglewood Institute.

Robert Reynolds has been a featured conductor and lecturer at international conferences in Austria, Australia, Norway, Belgium, England, Holland, Slovenia, Sweden, Germany, Denmark, and Switzerland. He has conducted in many of the major cities of Japan, Spain, and Sweden including concerts with the Stockholm Wind Orchestra, the Norrkoping Symphony Orchestra and professional wind ensembles in Bilbao and Barcelona, Spain.