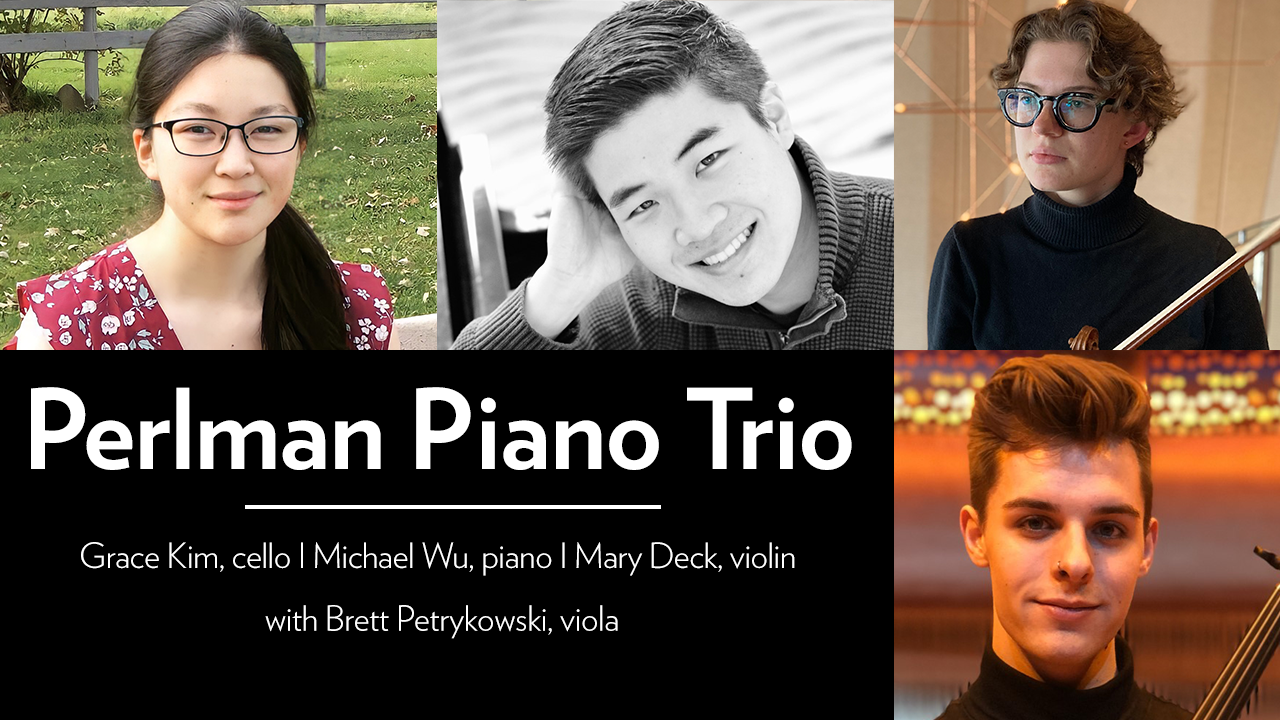 Dr. Kato Perlman continues to generously support the Perlman Piano Trio, providing annual awards for violinists, cellists and pianists, and occasionally additional musicians, in a prestigious student chamber ensemble, largely for undergraduate majors and one which draws a full house at annual concerts.

Michael Wu is a sophomore at the University of Wisconsin-Madison pursuing a double major in Piano Performance and Neurobiology (B.S.) A student of Prof. Christopher Taylor, Michael’s musical journey at the piano began at the age of five. Since then, he has captured numerous awards and accolades including first prize in the Madison Symphony Orchestra’s 2020 Bolz Young Artist Competition, where he performed Liszt’s Totentanz in a statewide televised event on Wisconsin Public Television; first prizes in the 2015 PianoArts Wisconsin Youth Piano Competition and the 2018 Steinway & Sons National Competition; runner-up in the 2019 MTNA Midwest Division Competition and prize-winner in the 2016 Cooper Festival and 2017 Bluthner International Competitions. Outside of the piano, Michael enjoys good food, long walks, and pondering the meaning of life while stuck in traffic.

Mary Deck is in her fourth year at the University of Wisconsin-Madison, where she is working on a BM in violin performance. She currently studies violin with David Perry and viola with Sally Chisholm. She began studying violin at Suzuki Strings of Madison at age 8, later adding viola as well, and then participating in WYSO and their chamber music program. A recipient of several musical and academic scholarships, Mary has been grateful for the opportunity to dabble in other disciplines, ranging from global history to French literature to number theory. In the fall she played in a masterclass given by Gil Shaham. She hopes to continue her performance studies in either violin or viola after graduating in 2023. In addition to her interests at school, Mary plays fiddle music and enjoys strange movies, downhill ski racing, and exploring literature.

Grace Kim is a sophomore majoring in Cello Performance (B.M.) at the University of Wisconsin-Madison, where she holds a four-year full-tuition music scholarship. She currently studies cello with Prof. Uri Vardi and chamber music with Prof. Parry Karp. She has also worked with Thomas Mesa, Alban Gerhardt, and Joseph Johnson in masterclass settings. She recently was a finalist in the 2021 UW-Madison Concerto Competition and the Milwaukee Symphony’s 2020 Stars of Tomorrow Auditions. She also won first prize in the 2019 Bolz Young Artist Competition, in which she performed as soloist with the Madison Symphony Orchestra in a live broadcast on Wisconsin Public Television and Radio. Last summer, she attended the Northern Lights Chamber Music Institute. Grace has served as principal cellist of the UW-Madison Symphony Orchestra and enjoys teaching as an instructor in the Community Music Lessons program at UW-Madison.

Brett Petrykowski is a senior at UW-Madison Mead Witter School of Music working to complete his Bachelors of Music in Viola Performance. Throughout his four years at MWSOM he has performed as rotating principle of the UW Symphony Orchestra, Violist of the Perlman Piano Quartet, in the graduate conducting lab ensemble,and played in several other chamber recitals. Along with this he has spent time working with the Wisconsin Youth Symphony Orchestra’s Music Makers program and also taught beginning viola and violin students through the Community Music Lessons program at UW.

After completing his undergraduate degree at UW-Madison this spring, he plans to continue his studies by pursuing a masters of viola performance. He is hoping to work closely with contemporary chamber music of underrepresented composers and non-profit music organizations on a local and national level.