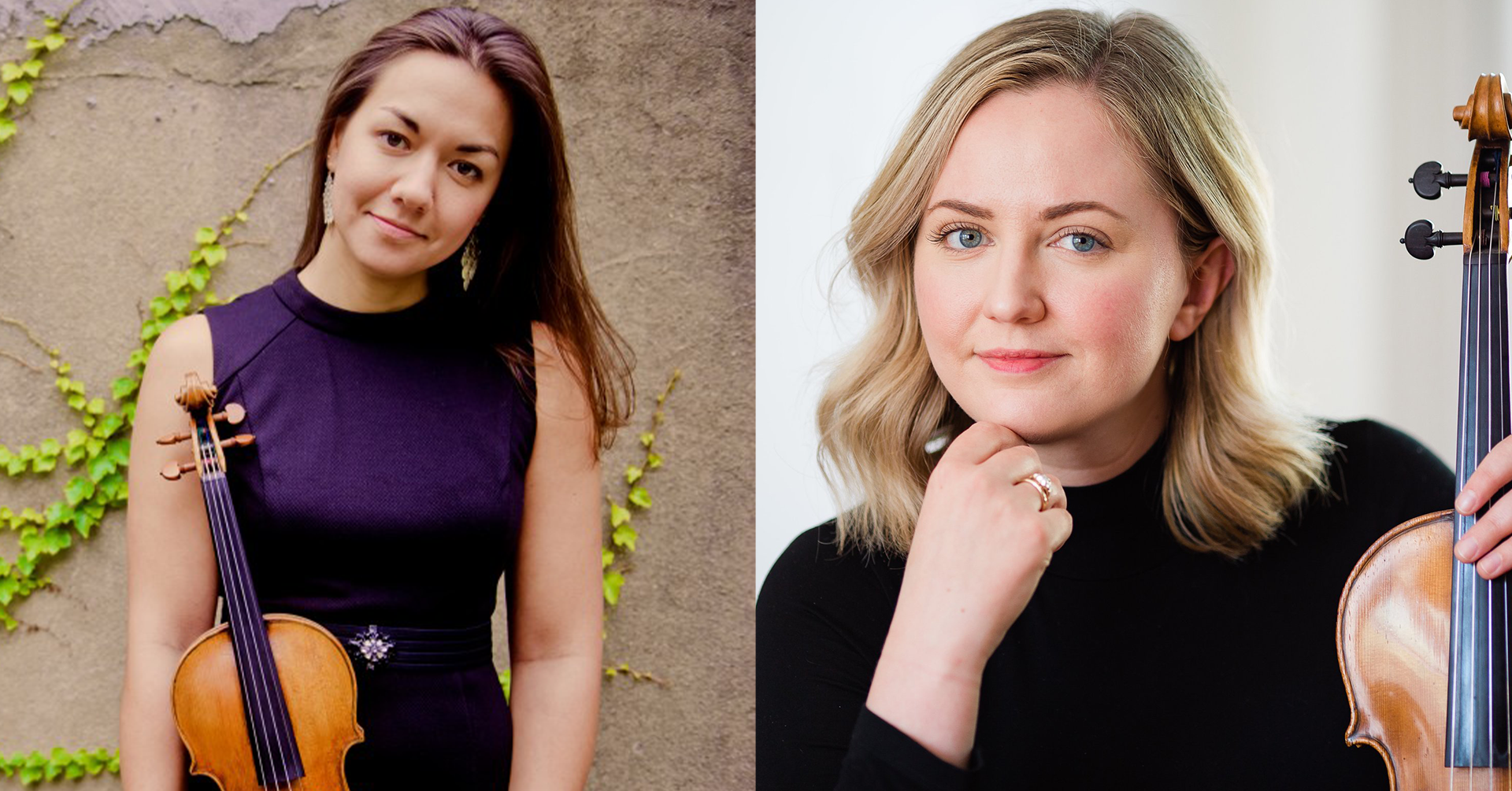 The UW–Madison Symphony Orchestra will accompany guest artists Eleanor Bartsch (Dubuque Symphony Orchestra Concertmaster and School of Music alumna) and GRAMMY nominated violinist Ariana Kim in the consortium premiere of Nightingales, a piece for two violins and orchestra by Professor of Composition Laura Schwendinger. They will also join members of the orchestra for the performance of JS Bach’s celebrated Concerto for two violins BWV 1043. Carl Maria von Weber’s energetic overture to his opera Oberon and the coloristic music of Romeo & Juliet suite by Sergei Prokofiev will close this concert that features four works written in four different centuries.

……
Hailed for her “clarion tone and technical aplomb” (Chicago Classical Review), Chicago-based violinist Eleanor Bartsch enjoys a diverse and vibrant career as a chamber musician, orchestral musician, Concertmaster, soloist, educator, concert curator, and entrepreneur at home in many musical styles. She is currently Concertmaster of the Dubuque Symphony Orchestra, Associate Concertmaster of the Elgin Symphony Orchestra, and in 2018 became first violinist of the critically acclaimed Kontras Quartet, a touring classical string quartet with an interest in exploring the intersections of classical and folk music. She has served as Concertmaster of the Chicago Philharmonic, Joffrey Ballet Orchestra, and Chicago Opera Theater Orchestra, and is Co-Founder of Madison, Wisconsin’s Willy Street Chamber Players, an award-winning chamber ensemble with an emphasis on creating community through classical music. Bartsch is a frequent extra musician in the pit and on stage at the Lyric Opera of Chicago and makes regular summer appearances in Door, County WI at the Midsummer Music Festival.

Over the course of her career, Bartsch has collaborated with an extensive list of ensembles and artists with highlights including Eighth Blackbird, the Spektral Quartet, the Knights, the Minnesota Orchestra, the Milwaukee Symphony, Music of the Baroque, and the Grant Park Symphony Orchestra. This season she has curated chamber performances for Chicago Phil Chamber (City Winery, Chicago ) and the Elgin Symphony Chamber Players.

Along with the rest of the Kontras Quartet, Bartsch recently completed a three-year term as Ensemble in Residence at Art of Elan in San Diego, CA. The group performed at a variety of venues including the San Diego Museum of Art, gave masterclasses at the University of California-San Diego, commissioned and premiered Steven Snowden’s evocative new work “Hidden Mothers” (2022), and collaborated with Malashock Dance in performances which included original choreography for Janacek’s String Quartet No. 2.

The Kontras Quartet has for years enjoyed an ongoing collaboration with the bluegrass ensemble, the Kruger Brothers. Bartsch made her debut in this unique formation in 2019 at Merlefest in Wilkesboro, NC, where she performed Jens Kruger’s Appalachian Concerto, Roan Mountain Suite, and many others in front of crowds of up to 5000 attendees. In fall 2022, the group will premier and record “The Moonshine Sonata,” a new multi-movement work composed by Jens Kruger written for the Kruger Brothers and Kontras Quartet.

In 2023, the Kontras Quartet will release their first full-length album with Bartsch as a member, “Folklore,” which will include works of Dvorak, Florence Price and others. A champion of new music, in fall 2022 Bartsch will premier “Nightingales for two violins and orchestra” by Berlin prize-winning composer Laura Elise Schwendinger with violinist Ariana Kim in two performances with the UW-Madison Symphony Orchestra and the Dubuque Symphony Orchestra.

A passionate music educator, Bartsch, along with the rest of the Kontras Quartet, served as an artist in residence and chamber coach at the University of Western Michigan in Kalamazoo from 2018-2020. Bartsch also enjoys coaching and mentoring a combination of advanced high-school-aged students and adult learners in the intensive week-long summer Kontras Quartet Workshop- a division of the Virginia Suzuki Institute. While completing her Masters’ degree, she acted as teaching assistant to Prof. David Perry at the University of Wisconsin-Madison. She is on the faculty of the Barrington Music Academy and has been a guest clinician at institutions throughout the United States.

Bartsch began her violin studies at the age of 4 in her hometown of St. Paul MN at the Northern Lights School for Strings where she studied with Ellen Kim and Young-Nam Kim. She received her Masters’ degree in Violin Performance with a certificate in Business Entrepreneurship from the University of Wisconsin-Madison under the tutelage of David Perry and Felicia Moye as a Paul Collins Distinguished Graduate Fellow. Bartsch also received her Bachelor’s degree from UW-Madison, during which she spent her summers at the Aspen Music Festival and School studying with Paul Kantor and was a tenured member of both the Madison Symphony Orchestra and the Wisconsin Chamber Orchestra.

Noted by The New York Times for giving “the proceedings an invaluable central thread of integrity and stylishness” and having “played with soulful flair,” violinist Ariana Kim made her New York recital debut at Carnegie’s Weill Hall during her graduate studies at Juilliard and is now a tenured professor at Cornell University.  Together with the Aizuri Quartet, she was awarded the Gold Medal at the 2017 Osaka International Competition, the 2018 M-Prize, and a 2019 GRAMMY nomination for their debut album, Blueprinting.  At 16, Ariana made her debut with the St. Paul Chamber Orchestra and at 24 was appointed acting concertmaster of the Louisiana Philharmonic in New Orleans and has since become one of the most respected artists of her generation.

A recipient of a Cornell University Affinito-Stewart Faculty Grant and a Society for the Humanities Grant, Ariana released her first solo album Routes of Evanescence in December of 2015 which features works for solo violin and violin + 1 written by American women composers including Ruth Crawford Seeger, Augusta Read Thomas, and Jennifer Curtis.  While on sabbatic leave from Cornell in 2016, Ariana lived and worked in Italy, teaching at l’Istituto Stradivari, performing with Milano Classica, and curating a cultural diplomacy public art project involving the Cornell Composition Department, the Cornell Architecture Department, and a group of North African and Mid-East refugees.  She performed two solo recital tours in Northern and Central Italy featuring works from J.S. Bach to Elliott Carter to bluegrass fiddle tunes; she is set to return to her “home away from home” this coming summer for a solo appearance with Milano Classica at the Paesaggi Musicali Toscani – a festival for which she became the newly appointed Co-Artistic Director in August 2019.

Ariana now marks her 17th season with The Knights, a New York-based imaginative and diverse musical collective that performs programs ranging from string quartets to bluegrass tunes and world folk music, to the great chamber orchestra masterpieces of the 20th century.  Though the COVID-19 pandemic of 2020 brought most live projects to a hault, the Knights are thrilled to announce a new partnership with the 92nd Street Y beginning in the 2021-2022 season.  In January of 2015, the group released its seventh album, …the ground beneath our feet – a collection of live performances from a recent U.S. tour – for Warner Classics, on which Ariana is a featured soloist in Steve Reich’s Duo for two violins and strings, alongside Guillaume Pirard; that track has since received much acclaim and was chosen as one of NPR’s “Songs We Love” for 2015.

Ariana also served 10 seasons as a member of the New Yorker-acclaimed New York new music ensemble, Ne(x)tworks, which made their international debut at the John Cage Festival in Berlin performing Cage’s “Song Books” to a packed house alongside the Maulwerker Company in March 2013.  Their dedication to the interpretation of graphic scores, open notation and collective improvisation led to a rare recording of the chamber music of Earle Brown, available on MODE Records.

Raised in Minnesota by parents Ellen and Young-Nam whom were her teachers from age 3 to 17, Ariana finds another musical home in her native Twin Cities as she is now in her 18th season with the Chamber Music Society of Minnesota.  Recent collaborations have included performances with Robert Mann, Fred Sherry, Peter Wiley, Samuel Rhodes, Nobuko Imai, Charles Neidich, and Leon Fleisher.  The proud educational wing of the Society, CMSMnext brings her to Twin Cities schools, conservatories, and community programs to offer presentations, outreach workshops and master classes.  She joined her father Young-Nam in a Co-Artistic Directorship of the CMSM in the 2019-2020 season.

Ariana has spent summers at Ravinia’s Steans Institute, Yellow Barn, and Orford Centre d’Arts.  A passionate pedagogue, Ariana spends much of the academic year teaching and mentoring a full studio of talented collegiate students at Cornell; this summer, she will join the faculty of the Palo Alto Chamber Music Workshop for the 20th consecutive year, the Northern Lights Chamber Music Institute for the 13th time, and the Crowden Music Center Chamber Music Institute for the sixth time.  She volunteers annually with the Title One school, Castillero Middle in San Jose, CA and has presented master classes throughout the U.S. and abroad at such institutions as Kent State University, The MacPhail Center, and the Massachusetts Institute of Technology.

Ariana received her masters and doctorate from the Juilliard School under the tutelage of the late Robert Mann, her undergraduate degree from the San Francisco Conservatory with Ian Swensen and Camilla Wicks, and usually co-resides in Ithaca and New York City.  During the 2021 calendar year, she will be living and working in Seoul, South Korea studying ancient traditional Korean instruments and music, teaching as a visiting artist at Seoul National University, and rock-climbing many mountains.

A second opera is in the planning stages now. Commissions include those from Miller Theater, an UnSafe commission for the American Composers Orchestra, New Juilliard Ensemble, Sounding Beckett (Classic Stage Co. Off-Broadway), Kennedy Center, StonyBrook Premiere series , National Flute Assoc. She has been on faculty at the Bennington Conference, New Music on Point, Irish Comp Summer School, St. Mary’s Composition Intensive, featured Composer at the Tallis Festival Switzerland (7/17) and Master Artist at the Atlantic Center for the Arts ( 7/2018). Her work on Cedille’s “Notable Women” (“hidden gem”, UK Guardian), review (Fanfare) “evokes a sense of serene mystery and infinite beauty.” CDs featuring her music (on Centaur/ Albany), received glowing reviews. A New York Times playlist review read “The chamber works grouped together on this captivating disc show off her acute ear for unusual textures..she sketches musical short stories of somnambulant fragility and purpose.” Review in Chic Tribune (of Eighth Blackbird) read “an acute sonic imagination and sure command of craft.”, in the  New York Times “The piece is darkly attractive, artful..moving…”, and the Boston Globe, “This was shrewd composing, the genuine article. Onto the ”season’s best” list it goes.” About her Creature Quartet just released by Albany Records on QUARTETS, featuring the JACK Quartet, nominated by Albany for a 2018 Grammy was reviewed in Fanfare by Colin Clarke as “The sheer intensity of both music and performance thereof is spellbinding, as if the passion of the composer for her subject shines through like a light.” Her full catalog is published by Keiser/ Southern.